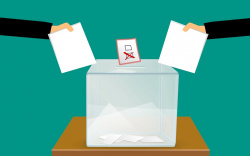 The official campaign for the early parliamentary elections in Bulgaria began on June 11. The campaign will run until 24:00 hrs on July 9.

Bulgarians will be going to the polls on July 11, 2021 after the three biggest political powers elected in the April 4 regular parliamentary elections failed to form a government.

A total of 15 political parties and 8 coalitions will run for July 11 early parliamentary elections. In the April 4 elections, the political forces were 30.

The 45th National Assembly had a short life, but adopted some changes related to the upcoming vote. According to the new amendments to the Electoral Code, in the polling stations with more than 300 voters, voting will be done only with voting machines.

A ballot paper will only be allowed if it is not possible to vote by machine.

The same applies for voting abroad. For now, however, the question remains whether the Central Election Commission will be able to procure the required number of voting machines to meet this requirement.

The National Assembly also passed an amendment according to which the limit of up to 35 polling stations in non-EU countries was lifted.

The MPs will again be elected by a proportional representation system, from party lists, but voters have the opportunity to a preference option.

The campaign must be conducted in Bulgarian language. Publishing and broadcasting of anonymous materials is banned during the campaign period.

Voting will open at 7.00 o’clock and will close at 20.00. If there are queues of waiting voters outside polling stations, voting can be extended until 21.00.

The changes in the Electoral Code also provide for video monitoring in the counting of votes in the polling stations and district commissions.

According to the new changes, a new Central Election Commission was elected, which now has fewer members – 15 people. The chairperson is Kamelia Neykova, nominated by “There is Such a People” party.