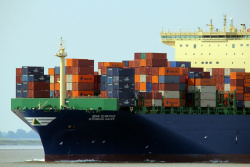 The volume of world trade in 2021 reached a record high of 28.5 trillion dollars. This is an increase of 25% compared to 2020, and compared to 2019 it is an increase of 13%. Growth in this area is expected to slow in the first quarter of this year, according to a report released today by the United Nations Conference on Trade and Development (UNCTAD).

According to UNCTAD forecasts, in the first three months of 2022, the growth rate of trade “will slow down”, so levels similar to those of the fourth quarter of 2021 are expected.

The positive trends in international trade last year were largely due to rising commodity prices, easing of pandemic-related restrictions and a recovery in demand thanks to stimulus packages, experts say. This year, global trade will be affected by a number of factors, including inflation in the United States and concerns about the real estate situation in China, according to UNCTAD.

The report emphasizes that the pandemic has put “unprecedented pressure on supply chains”. The disruption of logistics, the lack of semiconductors and rising energy prices have contributed to further supply shortages and a sharp rise in maritime freight prices.